Claude is the protagonist of GTA III. He is also known as Fido, Kid or just the GTA III guy. Not much is known about him, although he is the protagonist of GTA III. He is mostly known for his muteness and lack of emotion, although the reasons for this remains a mystery. His name also remained unclear until Catalina mentioned it in GTA San Andreas. A common explanation for his lack of speech, emotion and name is that the character was supposed to be the player (as was the case in privious installments of GTA), and as such didn't need an own personality.

It is possible Claude's appearance was based on Claude Speed, the protagonist of GTA2. 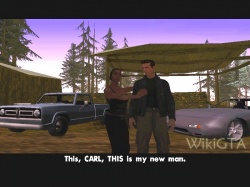 Chronologically Claude was first seen when Carl Johnson had to race him in the mission Farewell, My Love. Catalina recently dumped Carl, but wanted him to race Claude to see who would do most for her. Carl beats Claude, but Catalina decides to stick with Claude because she thinks Carl had an "unfair advantage". Although they raced for a "pink slip" (the loser would lose his car to the winner), they agree on giving Carl the deed of a garage. Claude and Catalina need the car because they plan to travel to Liberty City.

When Carl finds out the garage is nothing more than a run down building, he curses "that snake without a tongue", refering to the fact Claude, as in GTA III, does not speak.

Claude's name is revealed when Catalina screams it during one of her prank calls to Carl, apparently in mid-orgasm.

Almost ten years later, in GTA III, Claude and Catalina finally arive in Liberty City. According to the Liberty Tree, they committed numerous crimes in the West of the United States on the way to the city. At the start of GTA III, they are robbing a bank, but Catalina betrays Claude by shooting him during their run to the getaway car. Catalina tells him she was never truly in love with him and just did it for the money. She runs of with the money, leaving him for dead.

However, Claude survives but is arrested and is sentenced to a jail time of ten years. Due to a coincidence, his prisoner convoy is attacked during their way to Liberty City Penitentairy by the Colombian Cartel, who aim to kidnap one of the other prisoners in the convoy. Claude manage to escape with the help of another prisoner named 8 Ball. 8 Ball introduces him to his boss Luigi Goterelli, who has several jobs for Claude. Through Luigi, Claude gets in touch with other members of the Leone Mafie Family and even the don Salvatore leone. Unfortunately, Salvatore gets paranoid and tries to kill him. The dons wife Maria Latore safes Claude from a trap, and introduces him to her friend Asuka Kasen of the Yakuza.

Claude finally tracks down Catalina, who is now working with the Colombian Cartel to distribute the drug SPANK. His first attempt to kill her fails, but he and Asuka capture her right hand Miguel. Asuka and Maria torture Miguel to gain information on Catalina and the Cartel.

Claude later finds Asuka and Miguel to be killed by Catalina and her men. He finds a note in which Catalina tells him she has kidnapped Maria and he has to pay a ransom if he wants to see her back. Claude does so, but Catalina tells her men to kill him when she has the money. Claude escapes and follows Catalina's helicopter to the Cochrane Dam, where Maria is held. Claude manage to shoot down Catalina's helicopter and free Maria. At the end of GTA III, Claude and a constantly nagging Maria leave the dam together. When the screen fades to black, a gunshot abruptly silences Maria, indicating Claude killed her to get rid of her. 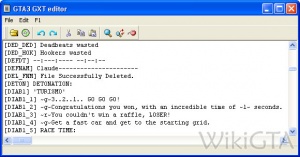 Claude's name was never used ingame until the very end of his and Catalina's role in GTA San Andreas. However, the name "Claude" was already frequently used before GTA San Andreas by fans to refer to the character. This was partly due to the similarities between the GTA III character and Claude Speed, the protagonist of GTA2. The name "Claude" also turned up to supposed to be the default name of the character in GTA III. An unused text file shows DMA Design originally planned to allow you to choose your own name in GTA III. The default name would have been "Claude".

Other frequently used names are "Fido", as Maria calls him to mock the fact he would obey Salvatore like a dog and "Kid", as Ray Machowski cals him.

In an interview, Sam Houser said the following:

The fact Claude and Claude Speed share the same first name suggests they are the same person. Claude's last name was however never mentioned, so it is uncertain they are indeed the same person. There are many similarities between Claude and Claude Speed from GTA2: The Movie, but if you look closely, you'll find several differences such as their shirt, jacket and hair color. Claude is mute and emotionless, whereas Claude Speed talks very agitated in GTA2: The Movie.

The Grand Theft Auto series and Rockstar Games repeatedly refer to the GTA III character with just "Claude". When asked whether they are the same person, Rockstar Games answered with: