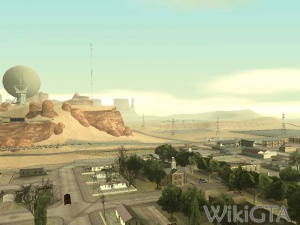 Fort Carson, with The Big Ear in the background.

Fort Carson is the biggest village in San Andreas, although it only counts about 369 inhabitants. It's named after the old Fort Carson of the 66th Cavalry. The village contains a medical centre, a police station and a 24-7, and is located close to The Big Ear and Area 69.

The Beagle on the driveway.
There's also a funny bug in the village. One of the houses has a small driveway where sometimes a Beagle spawns. The driveway for that matter is to small to contain the entire plane so there's no room for the wings. And therefor the left wing is stuck between the house and the porch and the right wing between a tree and a electricity pole. It's practically impossible to manoeuvre the plane out of it in time, because it starts to burn as soon as you get into the plane.