Grand Theft Auto IV (often abbreviated to GTA IV or even IV) was announced by Take Two Interactive on the 9th of May, 2006. The game was released on the 29th of April, 2008. The game is released for the PlayStation 3 and Xbox 360 at the same time. The PS3 and Xbox 360 versions of the game will be practically the same, but timed-exclusive downloadable content was announced for the Xbox 360 version. The first download pack, named "Grand Theft Auto IV: The Lost and Damned", released on Februari 17th 2009 (it released for the PC and PlayStation3 on the 13th April. (16th of April in Europe.) The second DLC, The Ballad of Gay Tony, was released on October 29th, 2009. The PlayStation 3 and PC versions were later released on April 13, 2010 in North America and on April 16, 2010 in Europe. The PC version was released in North America and Europe on the 2nd and 3th of December, 2008. The PC version includes a few multiplayer extra's and the Video Editor (which also marks the first tool to use Social Club as a platform since the Club's launch.)

There also was a special edition for both consoles on the day GTA IV was released. This collectors edition is packed in a metal safe deposit box and contains the game, an artwork book, a music CD, a key chain and a duffel bag.

GTA IV is the first GTA of the IV-era, and uses RAGE, the engine which was also used for Rockstar Presents: Table Tennis. 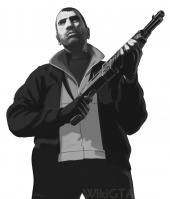 The story is all about an East-European, Niko Bellic, who emigrates to Liberty City in the United States after his cousin Roman insisted on it. Roman, who moved to America earlier, sent his cousin an e-mail in which he said he totally made it in Liberty City. Niko decided to go to America, to also experience the American Dream. When he arrives in Liberty City, he discovers Roman lied to him: instead of leading a successful life, he runs a taxi company in Broker and is in trouble with criminal organisations.

The skyline of Liberty City.

GTA IV is set in a modern Liberty City. Liberty City already featured in previous GTA, but has been totally redesigned for GTA IV. The city is a more accurate representation of New York City, much more than the previous versions of the city were. Liberty City consists of four boroughs on three islands, plus the island Alderney, which is based on New Jersey.

Apart from the looks, the atmosphere of Liberty City is based on New York. Liberty City is, just like New York, a city which never sleeps. Every neighbourhood has its own feel, like the commercial Algonquin or the run down neighbourhoods in Bohan. Crime, of course, has an important role in the city. For example, Niko has to deal with Russian criminals in Broker and corrupt LCPD police officers. In the beginning of the game, some bridges in Liberty City are closed due to a terrorism treat.

Niko Bellic in the first trailer.

GTA IV has four trailers, which can be seen on the official website. Compared to previous GTA's, these trailers, especially the first one, have been released very early. It was also the first time a trailer was used to show the first glimpse of a GTA. Rockstar Games used a big publicity campaign for the first trailer. It was announced a month before the release, after which a countdown was shown on the site and television. The attention for this trailer was very high, so the servers of Rockstar Games couldn't stand it and the records of the number of online visitors on GTAForum.nl and GTAForums.com were broken.