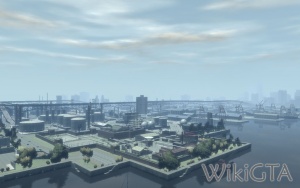 Alderney City is a city west of Liberty City in GTA IV. It is situated in the Alderney state, which is the westernmost island of GTA IV. Alderney City is based on Jersey City, and Alderney is based on New Jersey. Its name is a reference to the Channel Islands (just like New Jersey), even though an in-game documentary film states that Alderney is named after Phillip de Alderney. Alderney is separated from Liberty City by the West River, but does have connections to it via the Booth Tunnel and the Hickey Bridge.

Both in-game, in the manual and on the official GTA IV website you may find disparaging comments about Alderney. These comments mention the fact that Alderney mostly consists of industrial and residential areas and swamps, showing that Liberty City rather does not have anything to do with Alderny City.

The first Grand Theft Auto has an equivalent to New Jersey and Jersey City too, but it was named New Guernsey and Guernsey City at that time. You cannot visit Alderney in GTA Chinatown Wars, although the story does take place in the same Liberty City as GTA IV.

Alderney City is independent from Liberty City for the most of it, even though they share the same police force, the Liberty City Police Department. However, the force does differ if it comes to their uniform. You can see the force in action at the Alderney State Correctional Facility, where you will find Alderney's and Liberty City's criminals and where most of the local police force is doing their best to keep these criminals in line. The Alderney police force carries the same weapons and uses the same police cars and police departments as the rest of the LCPD. The LCPD has three departments in Alderney: one in Acter, one in Leftwood and one in Acter Industrial Park.

Alderney does also have its own hospitals, which will set you back on your feet whenever you become 'Wasted' in its vicinity. The North Tudor Medical Center can be found in Tudor, like its name suggests. The second and last hospital of Alderney is called the Westdyke Memorial Hospital, and is situated in Leftwood. This hospital is accessible and is extensively used in the storyline during the mission Flatline. Alderney does also have its own fire departments, one in Tudor and the other one being in Berchem.

Each city has its own gangs, even Alderney. One of the biggest (biker) gangs of GTA IV is The Lost Motorcycle Club, whose home base is on the Alderney island. It can be found more precisely in Acter, although The Lost do like to assault their rivals in Algonquin, the Angels of Death. The Lost President, Johnny Klebitz, does also have its safe house in Alderney, which he inherited from late Brian Jeremy, also in Acter. Many other members of The Lost may be living in Alderney, as most of them were also born there.

Apart from biker gangs, Alderney is also the home of many Italian mafia families, like the Ancelotti family, the Pavano family and last but not least, the Pegorino family. The first family operates from Little Italy, Liberty City, which means that they have little influence in Alderney. The Pavano family, on the contrary, uses the Alderney island as its home base, even though we see them only two times during the GTA IV storyline. The family runs a big company in Alderney, Auto Eroticar, which is a car dealership selling mostly luxury cars. During the mission Payback however, it is left completely destroyed, after Niko Bellic was sent by Jimmy Pegorino. The third family is the Pegorino family, which is the most prominent during GTA IV. For example, Niko visits Jimmy at his house for missions and several deals between families often go wrong. The Pegorino family is based on the so-called DeCavalcante family, which also operate from New Jersey in real life.