Avery Carrington is a capitalistic real estate mogul from Texas. He wears a cow boy hat and drives a luxurious black Stretch. Carrington does not fear to use criminal tactics to make his projects prosper. He was the mentor of Donald Love.

Avery Carrington meets Tommy Vercetti through Ken Rosenberg in 1986. He asks Tommy to solve a few problems regarding his latest project: a construction site in Vice Point (where the Fun Fair used to be) which progress is hampered by another construction site. Tommy triggers a strike and blows up the other building using small remote controlled helicopters with explosives. He later asks Tommy to trigger a gang war between the Cubans and Haitians by disrupting a Haitian funeral with a Cuban gang car. As Avery puts it:

This technique was written down and employed in GTA III by Avery's apprentice Donald Love. 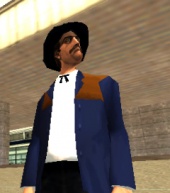 Avery comes to Liberty City in 1998 to make a deal with Panlantic Construction. Donald Love, now an independent real estate mogul himself, wants the plans for this project for himself to regain his fortune and orders Toni Cipriani to kill Avery and steal the plans. After Avery's death, his corpse is stolen by Toni so the cannibalistic Donald can eat him.