Phil Cassidy is a patriotic weapon enthusiast who claims to have served in the army, although his record shows he was rejected due to his alcohol addiction. He got hte nickname One-Armed Phil after he lost his arm in an accident in 1986. He sells heavy weapons which aren't available at the gun shop Ammu-Nation. He also makes his own 'boomshine', a distilled beverage with a high alcohol content.

Phil meets Victor Vance in 1984. He gets in trouble when he breaks his relationship with Jerry Martinez and Vic has to protect him and his Boomshine several times. Phil swears he'll never touch Boomshine in the mission Marked Men. 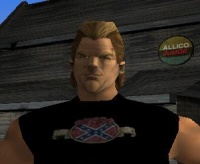 Two years later, Phils friend Cam Jones suggests Phil to Tommy Vercetti as gunman for the heist they are planning. Tommy beats Phil at the rifle range and Phil agrees to help Tommy with the heist.

Tommy later helps him fighting a rivalling Mexican arms dealer. Phil appears to have forgotten his promise, as he still produces boomshine. When he tries to demonstrate a bomb under the influence of his boomshine, the explosion rips of his arm and Tommy has to drive him to one of Phils friends who can provide medical care.

Phil moved to Liberty City before 1998 and started Phil Cassidy's Fully Cocked Gun Shop on Staunton Island. Toi Cipriani meets him in the mission More Deadly Than The Male, where Phil remarks he could just as well move his shop to the ferry terminal, because he does most of his business there. 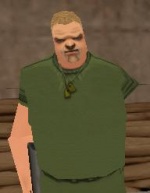 It is revealed in GTA III he did just that. With the completion of the Callahan Bridge and the Porter Tunnel, the ferry had become obsolete. Phil bought the Staunton terminal and turned it into his shop.

Claude meets Phil when Ray Machowski informs him he needs help defending his new shop against the Colombian Cartel. Phil claims he lost his arm in Nicaragua during the Vietnam. After this, Claude can buy several weapons here and there's even a parked Rhino available when you complete the storyline.