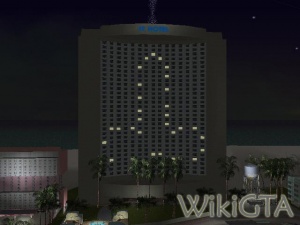 The Chariot Hotel is one of the large hotels next to the beach of Vice City. Tommy Vercetti enters the building to make pictures of Alex Shrubs affaire with Candy Suxxx in the mission Martha's Mug Shot.

The hotel is mostly known for a rather obscene easter egg. At night, the windows of the hotel are lit in the shape of an enormous penis. A fountain is located on top of the building to contribute to the effect.

In GTA Vice City Stories the shape is slightly different and the fountain is missing. The easter egg can only be seen when viewed from a distance. If you get to close, more windows will be lit, camouflaging the shape.

In GTA Vice City, a poster with the advice "Don't just jump; Hyperjump!" from the 'Samartians' (a parody on the Samaritans) to people who plan to commit suicide can be found in the top corridor. This corridor can not be entered before you can do the mission Martha's Mug Shot.