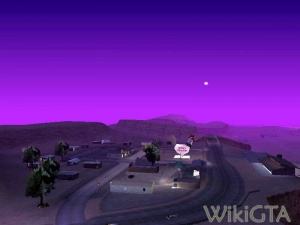 Las Payasadas, with "The Worlds Biggest Cock" in the center of the screenshot.

The town Las Payasadas (also known as Las Payasdas) in Bone County, San Andreas, is known for The World's Biggest Cock; an enormous mechanical rooster which is an advertisement for "Pecker's Feed and Seed". Las Payasadas has 211 inhabitants. Cock Rock can be found near the town.

The name 'Las Payasadas' is Spanish. The word is used for the jokes and nonsense of a clown.