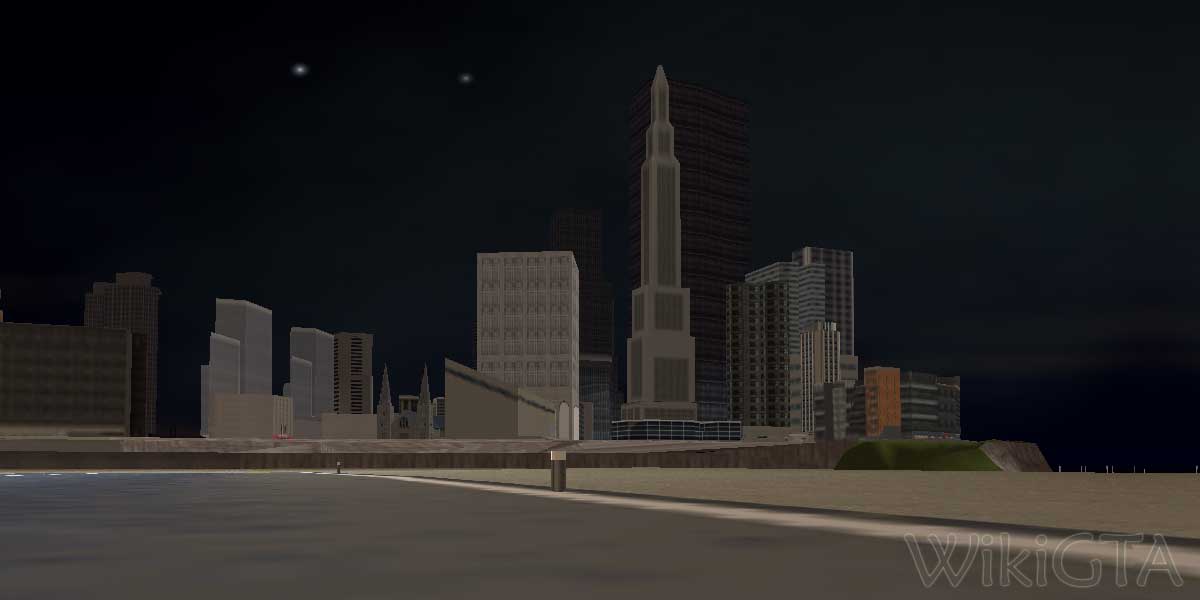 The skyline of Staunton Island, seen from Francis International Airport

Liberty City is a North American city on the East coast, based on New York. It is the main setting of several GTA's, most notably Grand Theft Auto III and GTA Liberty City Stories. The city lies close to Carcer City. The city is a recreation of the original Liberty City, and in its turn has been recreated for GTA IV.

We see Liberty City for the first time in TPV in GTA III, in stead of a Top Down View. The city consists of three major areas: Portland, Staunton Island and Shoreside Vale, which respectively can be seen as the residential district, the commercial district and the industrial district. The islands are connected with the Callahan Bridge, the Staunton Lift Bridge and the Porter Tunnel.

You'll start the game in Portland in GTA III as well as in GTA Liberty City Stories. In Portland you'll find the harbour of Liberty City and the poor neighbourhoods of the city. You will encounter the Triads, the Diablos and the Mafia families Leone, Forelli and Sindacco in this area.

Saint Marks is mostly under control of the Leone Family and Forelli Family. The Italian restaurant "Marco's Bistro", or "Saint Marks Bistro", is located in this neighbourhood and acts as a meeting place of the Forelli's since around 1992. As a result of this, the restaurant has a violent and bloody history. Sonny Forelli discusses his plans with Tommy Vercetti here, Carl Johnson flies to Liberty City to murder a certain Forelli member here and Claude kills Mike Forelli in front of the restaurant.

Behind Saint Marks, steep cliffs separate Portland Beach from the city. Salvatore Leones mansion, the Gentleman's Club, is located on top of the cliffs. Portland Rock, a rock island with a light house, is located in front of the beach

The northern tip of the island is called Harwood, and contains an entrance of the Porter Tunnel, a car crusher, 8 Balls bomb shop, Capital Autos and the Harbour Tunnel. Sonny Forelli tried to get rid of Tommy Vercetti by leading him into the hands of eleven hit men in Harwood. Tommy killed all the assassins, earning the nickname 'The Harwood Butcher', but he got arrested and was sent to prison for ten years.

The Red light District is the neighbourhood where you can find several nightclubs like Luigi's Sex Club 7. You'll also find a Pay 'n' Spray, an Ammu-Nation and the first safe house of GTA III here.

Hepburn Heights, with Saint Marks in the background

Next to the Red Light District lies Hepburn Heights, which is Diablos turf. Misty lives in this neighbourhood.

The small area around the Portland entrance to the Callahan Bridge is called Callahan Point (or Waterfront Promenade, as seen on road signs). You'll find a roadhouse, the old schoolhall, and a parking lot here..

The majority of the large Chinese community of Liberty City lives in Chinatown, which is controlled by the Triads. Along Chinatown lies Portland View, which is nothing more than a road between Saint Marks and Trenton.

Trenton is the industrial zone of Portland. Joey Leone's Garage, Marty Chonks' Bitchin' Dogfood Factory and the Mainstreet Taxi Company are located here. Next to Trenton you'll find Portland Harbor, the harbour of Liberty City. A ship that buys government vehicles is docked here in 2001, and another ship is blown up by Claude and 8 ball in the same year. Atlantic Quays consists of some warehouses, two wooden landing stages and a long stone pier.

Staunton Island is the commercial district of Liberty City. The island has long straight roads, flanked by tall skyscrapers. Belleville Park, a Central Park look-a-like, can be founs in the centre of the island. Staunton Island can be reached from Portland with the Callahan Brigde, the Porter Tunnel, the subway and until somewhere between 1998 and 2001 with the ferry. The gangs you'll find on Staunton Island are the Colombian Cartel, the Yardies and the Yakuza.

The downtown area, with most skyscrapers and office buildings, consists of Bedfort Point and Torrington, in the southern end of the island. Notable buildings are the Kenji's Casino (previously known as the Big Shot Casino), the Love Media Building, an Empire State Building look-a-like and a cathedral. Between 1998 and 2001, most of the cemetery next to the cathedral has been used to build a concert hall. Phil Cassidy's Fully Cocked Gun Shop is also located in this area in GTA Liberty City Stories.

Newport is located at the northern end of Torrington. The name is derived from the marina next to the Callahan Bridge. When crossing the Callahan Bridge, you will enter Staunton Island in Newport. The LCPD headquarters, a Pay 'n' Spray, one of 8 Balls bomb shops and one of Toni Ciprianis apartments are located here.

Belleville Park lies next to Newport, and is based on Central Park in New York. The park contains a basketball field, toilets and a monument. Among the buildings next to Belleville Park is a building based on the triangular Flatiron Building.

The Liberty City Campus (LCC) is known as the worst university of the United States, and is located next to Belleville Park.

Fort Staunton was the home of the Sindacco Family for a long time, but the neighbourhood is destroyed when Toni Cipriani blows up a abandoned subway station underneath Fort Staunton in 1998. Panlantic Constructions has begun with the construction of Staunton Plaza, but the building site is used as a front to sell SPANK.

The northern tip of Staunton Island is called Rockford. One of the terminals of the ferry is located here, but after the ferry is closed, Phil Cassidy sets up his weapon shop here.

Shoreside Vale is not an island, bu a peninsula. It is the industrial sector of Libert City, containing several warehouses, Francis International Airport and the majestic Cochrane Dam. Shoreside Vale can be reached via the Staunton Lift Bridge or the Porter Tunnel. Both the Colombian Cartel and the South Side Hoods can be found here.

Cedar Grove, consisting of several luxurious villa's on the hills in northern Shoreside Vale, is one of the richest neighbourhoods of Liberty City. Toni Cipriani uses one of the villa's as safe house in 1998. In 2001, the Colombian Cartel and Catalina use one of the villa's as headquarters. A observatory is located on top of the hill, but it can not be reached. A tunnel exit is located on both sides of Cedar Grove. They are connected in 1998, but three years later the tunnel is closed for a tunnelinspection. According to the map, the exits are no longer connected.

Below the hill lies Witchita Gardens, which is controlled by the South Side Hoods. One of the Porter Tunnel exits is located here.

The area on the other side of the river is called Pike Creek. You can find some warehouses, a police department, a hospital, a Pay 'n' Spray and one of 8 Balls bomb shops here.

A large portion of Shoreside Vale is used for Francis International Airport, the airport of Liberty City. The airport has it's own fire and police department and two runways where airplanes frequently take off or land. The control tower resembles the tower of Los Santos Airport, which is based on the tower of Los Angeles. Some missions are set on the airport but the aiport is best known for the Dodo, a small and hard to control airplane. A subway station and a war memorial are located in front of the airport.