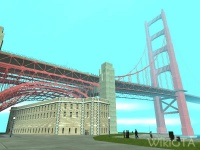 Jizzy's Pleasure Domes is a well-known nightclub in San Fierro. The club is located in an old fortress in Battery Point, the northern tip of the city. The Gant Bridge is built directly above the building. The Pleasure Domes was run by the pimp Jizzy, but he was killed by Carl Johnson in 1992.

During the mission Ice Cold Killa, Carl Johnson enters the building through a window on the roof to kill Jizzy. The interior exists of a large atrium with stages and a bar, surrounded by twee floors with separated rooms.