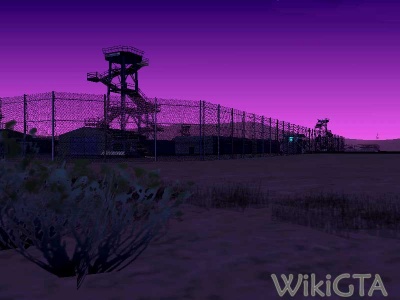 Area 69, with the fence and one of guard towers on the foreground.

Area 69 (also known as the Restricted Area or the No Fly Zone) is a huge, heavily guarded research facility in Bone County, San Andreas. You will get a wanted level of five stars when you get to close to the area, and SAM-installations will target planes above the no fly zone. The area is blanked out on the map that came with the manual.

Area 69 is located north of Fort Carson. A road leads from this town to the main entrance of the research facility. The whole area is protected with a large fence and several guard towers. Four SAM installations are located around the no fly zone, and they will shoot any passing aircraft without warning.

On the other side of the fence several buildings can be found, such as military depots, warehouses and research labs. A depot for military vehicles is located at the eastern end of the terrain. You'll find a Patriot, Barracks, two Rhinos, a Cargobob and later on two Hydras here. This part of the base is fenced of from the rest of Area 69, but you can break in by crashing a vehicle through the south-east fence. To be able to get away with one of the aircraft, you may want to blow up one or more of the SAM-installations.

The terrain is a parody of the real-life "Area 51", a military base in North-America where supposedly alien technology research is done. The number '69' in the name is a pun, as all numbers 69 in GTA San Andreas.

During the mission Black Project, Carl Johnson breaks in Area 69 to steal a mysterious project which was developed in the research facility: a jetpack. It becomes clear that the most important part of Area 69 is located beneath the surface. The underground complex contains storage rooms for cruise missiles and other material, a control chamber and a large number of laboratories. The jetpack was developed on the bottom of a deep shaft. Carl passes several locked doors, which suggests the complex is even larger than we have seen in this mission.

The underground complex is locked before and after the mission, but it is possible to reach it through the blue hell, by flying underneath the complex, and decending untill you are spawned in the complex. You can also use a trainer with teleport function, to directly teleport Carl into the complex. It is wise to use the 'no wanted level' cheat, to prevent the wanted level for entering the area. You can't leave the area without a trainer or dying.

The underground complex of Area 69 is obviously inspired by the Mesa Research Facility from the game Half-Life. Even the well-known red and white crowbar of Gordon Freeman, the protagonist of Half-Life, can be seen, lying on a table in one of the laboratories.