The blue hell in GTA III, seen from the subway station in Shoreside Vale

How does it work? 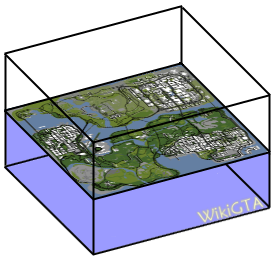 Picture the world of a GTA as a large rectanguluar area, floating in a void. Under the surface of the game area isn't solid ground, but a large empty space. This is what we call the blue hell. You're not supposed to be able to enter this void. However, due to some bugs like unsolid surfaces, it it possible to 'fall' through the ground, into the blue hell. You'll keep falling untill the game realises you're to low and you shouldn't be there, and spawns you back on the surface. If you can prevent going to low (for example, by using a helicopter or jetpack, or walking on the Porter Tunnel), you can use the blue hell to get to places that are usually out of reach.

It is also possible to fall into the blue hell above the entrance to the Porter Tunnel in Portland. This allowes you to acces Staunton Island and Shoreside Vale before the Callahan Bridge is repaired.

Ghost Town is located in the blue hell, behind the mountains in Shoreside Vale. It is possible to reach Ghost Town with the Dodo, although this is very difficult.

Helicopters make it fairly easy to explore the blue hell of GTA Vice City, although there aren't many interesting locations in the blue hell of this GTA. You'll find Howlin' Pete's Bike Emporium, an unused interior opposite the Greasy Chopper, and a out-of-place printing machine used in a cutscene of the Printing Studios.

The blue hell of GTA San Andreas is very easy to reach and explore due to the jetpack. There are several interesting interiors, including the underground research section of Area 69. The blue hell and the normal game world are called 'Heaven K'.