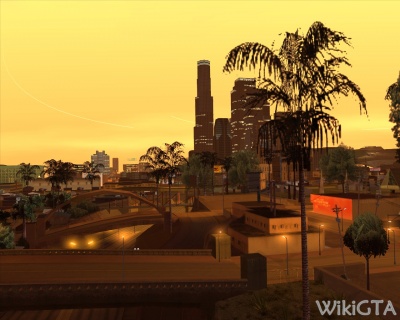 Los Santos, with Downtown in the background

In Grand Theft Auto: San Andreas, Los Santos is a city in the state of San Andreas. The city is based on the Los Angeles, a city in the south west of the USA. 'Los Angeles' means 'The Angels' and 'Los Santos' means 'The Saints'. That's why the nickname of the city is 'City of Saints'. The city contains various population groups, like the different gangs.

The skyline of Downtown Los Santos and the area Commerce can be recognized from a great distance by the characteristic Babel Towers. In the vicinity of Pershing Square are the police office and the City Hall located.

In the western part of Los Santos you can find the more exclusive part of Los Santos, with in the south the boulevard along Verona Beach. In the southern part of Los Santos you have Santa Maria Beach, a great touristic attraction. North from there, you have the area of Marina with a marina and some café's and restaurants. A bit more to the north is the world famous area of Vinewood, the biggest film studio in the world. Next to this part of the city, there is a shopping district named Rodeo, where you can find stores like Victim and Didier Sachs.

At the most southern part of the city you can find Verdant Bluffs, the biggest park of San Andreas. From there, you can have a great view over the city of Los Santos.

Between Vinewood and Downtown, the districts Temple and Mulholland can be found. These exclusive neighbourhoods houses lots of the city's rappers, actors and producers. Next to these is Richman, an expensive neighbourhood for the very rich.

The other end of the city shows a whole other side of Los Santos. There you will find the poor hoods, such as Jefferson, Idlewood, (home of the Ballas) and Ganton, (territory of the Grove Street Families).Gangwars between the various gangs of Los Santos are here part of daily life.

Dissecting the city is a freeway, that runs from Mulholland Intersection through Downtown to Los Santos International Airport. East of the Airport you can find the harbour, Which mainly consists of a huge artificial island with the name Ocean Docks.