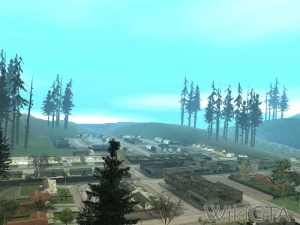 The church features a drive-through confession chair, where you can confess your sins 24 hours a day. The name 'Park 'n' Pray' is a pun on the 'Pay 'n' Spray'. A small graveyard is located next to the church, where you can see an open tomb with an shovel. One of the gravestones reads 'Scott Wilson, medal of honor'. Scott Wilson is one of the designers of the GTA San Andreas countryside.

An abandoned rusty wheelchair is located on the jetty in Fisher's Lagoon near the village. This wheelchair has caused much debate among fans, but no clues to its owner have been found.