The SMG (short for submachine gun), in the first PlayStation 2 version of GTA Vice City MP5 and in later versions renamed to simply MP, is the most powerful submachine gun in GTA. Due to this it is the weapon of choice of the FBI and even the army in some GTA's. In Grand Theft Auto IV, NOOSE's Tactical Response Units and FIB agents uses it along the carbine rifle and will fire it from their vehicles, making short work of the player's getaway vehicle. Your average day street criminal will be seen less often with this weapon.
A downside of this weapons is that it can only hold 30 rounds in a single magazine, in comparison to the 50 rounds of some of the other submachine guns. Also, you can't fire this gun while walking, which is also possible with some of the other submachine guns.

There are three versions. The model in GTA Vice City, GTA San Andreas and GTA Chinatown Wars is based on the MP5A3. GTA Liberty City features a smaller model of the same weapon: the MP5K (the "K" stands for the German "kurz": short). Grand Theft Auto IV contains another model, this time a SW MP10. The GTA Vice City Stories version however, seems to be a strange amalgamation of MP5 parts; it has the collapsible stock of the MP5A3, the shorter barrel and vertical foregrip of the MP5K, the foregrip is undersized giving the appearance of the smooth forearm with a catch at the end as seen on the SP89, and the muzzle almost appears to be an attempt at an MP5SD suppressor as it extends past the forearm, but is thicker than a barrel should be. 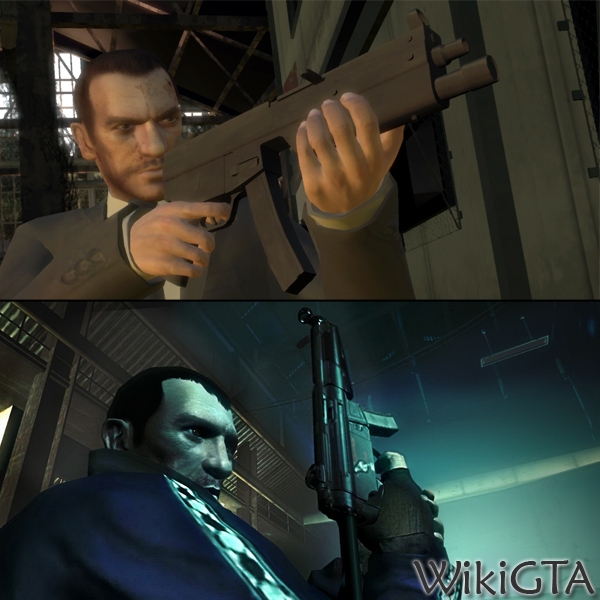